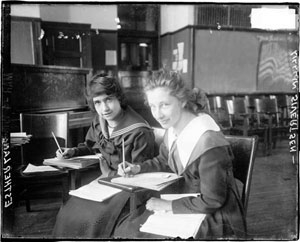 The Classroom provides a variety of resources and strategies to help teachers and students make sense of the Lost Museum’s historical materials. Using the American Museum’s many attractions, the site attempts to convey the social, cultural, and political history of antebellum and Civil War America, emphasizing issues of race, gender, reform, immigration, sectionalism, and popular culture. Toward that end, background essays (between 750 and 1000 words in length) offer context for the site’s key historical themes. Teaching The Lost Museum is an overview essay that enumerates the specific exhibits, documents, and lessons that pertain to topics commonly taught in U.S. history courses. This essay can help instructors familiarize themselves with the site and create student assignments related to their teaching needs. Numerous activities offer a structured way to use the site within a class period or two. Reference resources include a timeline of important events in the life of the nation and the American Museum; a bibliography of historical scholarship on Barnum, the American Museum, and the museum’s attractions; and a list of links to related Web sites.

Teaching with The Lost Museum

This overview essay enumerates the specific exhibits, documents, and lessons that pertain to topics commonly taught in U.S. history courses. It is designed to help instructors familiarize themselves with the site and create student assignments related to their teaching needs.

Beginning with the birth of P. T. Barnum in 1810 and ending with his death 81 years later, this timeline covers events in the history of the U.S., New York City, and the American Museum.

This bibliography includes scholarly works on P. T. Barnum, nineteenth-century New York City, and some famous exhibits and attractions that appeared at the American Museum between 1843 and 1865.

By 1865, New York City spread as far north as 42nd Street, but the vast majority of businesses remained below 14th Street. The economic and cultural heart of the city continued to be below Canal Street where P.T. Barnum's American Museum was located. This bird's-eye view of lower Manhattan allows users to select a magnifier to view buildings, streets, and parks, or to select specific buildings and cultural sites to learn more about some of New York City's cultural and economic institutions in the mid-nineteenth century.

Barnum and Science in the Antebellum Era

This 900 word essay traces changing understandings of science and scientific knowledge during the antebellum era. With its many natural history exhibits (both real and humbug), Barnum's American Museum marked an important intersection between science and popular culture. Links to images and documents from the period that illuminate Barnum's use of science appear at the end of the essay.

A City Divided: New York and the Civil War

This 850 word essay describes New York during the Civil War, a city where antiwar sentiment mixed with entrenched class and racial tensions. In the summer of 1863, the Union military draft sparked four days of rioting unprecedented in American history.

Reform and Reformers in the Antebellum Era

By Nancy A. Hewitt

This 800 word essay offers an overview of the many reform causes in which men and women of all races became involved during the decades prior to the Civil War.

Urban Popular Culture in the Age of Barnum

This 900-word essay describes the vibrant new forms of popular culture that developed in the growing cities of the antebellum U.S. The explosive growth of live entertainment and print culture included, but was hardly limited to, Barnum's American Museum, and incorporated elements of celebrity and international transmission that are still familiar today.

This essay describes the range of predominantly Protestant religious denominations present in antebellum U.S. society, and their impact on social and political life. The American Museum contained a number of religious exhibits, including paintings and waxworks of famous christian scenes.

This 800 word essay provides historical context for the social, political, and economic circumstances of African Americans in New York City in the decades preceding the Civil War. Links to primary documents and images relating to the same topic appear at the end of the essay. The essay also describes Barnum’s own history of presenting non-white "human curiosities" at the American Museum and elsewhere.

This essay provides a brief overview of the American Museum and its pioneering place in American popular culture.

This 600 word essay relates the place of female customers at the American Museum to the evolving public and private roles of working-class and middle-class women in mid-nineteenth century New York City. Links to images and documents from the period that illuminate these roles appear at the end of the essay.

Who Burned Down Barnum's Museum?
An Inquiry into 19th Century Social Conflict

This activity guides students through the game-like mystery of who may have burned down the American Museum. Students work in teams, read background esays on social, political, and cultural conflicts in nineteenth century America, then search for clues specific to one suspect. Students use the online notebook to assign clues to suspects and determine if they would accuse their suspect. Designed to work in a 90 minute class period, this lesson can be modified to fit shorter class periods by assigning steps 1 and 2 as homework.

The Path to War?

The Seriate Slide Cabinet in the American Museum's Waxworks room conveys the events of the 1850s that brought tensions between North and South to a boiling point. For this activity, students will have to work collaboratively to create a written explanation of the slide show for a foreign visitor to the American Museum who doesn’t know about the events shown in the slides or their significance.

You are probably familiar with many local cultural institutions such as museums, zoos, and botanical gardens. Barnum's American Museum was such an institution -- except that the original American Museum existed in the 19th century and the Web site museum is a virtual re-creation. The producers have digitally rebuilt the Museum three-dimensionally so that you and other users can investigate the history of the era to learn how the museum influenced American life then and now.

Imagine Yourself as P.T. Barnum

In this exercise, students can explore the virtual American Museum with the goal of gathering information on the actual museum's proprietor, P. T. Barnum, and writing a point-of-view monologue by the Great Showman.

Behaving in Public in the Nineteenth Century

In the early nineteenth century, rich, middle-income, and poor New Yorkers often went to the same theaters--the most popular public place for entertainment at the time. Such mixing of classes upset many wealthy and middle-class theatergoers who complained about the often rowdy behavior of laborers, artisans (skilled workers) and apprentices who also were part of the audience. By the time Barnum's American Museum opened in the 1840s, different classes no longer attended the same theaters. This activity asks students to evaluate the American Museum as one of the first public places where different types of New Yorkers (and their families) once again intermingled--but under very different circumstances than before, with new rules curbing certain kinds of public conduct.

New York State abolished slavery in 1827 but did not extend full civil rights to its African-American citizens. In New York City, black New Yorkers were barred from many public places--including Barnum's American Museum. This activity points students toward selected Archive materials, as well as exhibits in the Museum rooms, and asks them to consider how different visitors to the American Museum might have reacted to Barnum's exhibits about race.

Fame and Fortune: The Marketing of Celebrity

This activity focuses on the rise of mass popular culture and the creation of celebrity during the 1850s. Designed for high school juniors and seniors, it examines how P. T. Barnum created public enthusiasm for Jenny Lind, a Swedish soprano, and compares Lind’s career to that of her contemporary, African-American singer Elizabeth Greenfield. The activity encompasses such themes as how popular entertainment informs social values; the role of celebrity in American culture; and how responses to Lind and Greenfield reflect antebellum ideas about race, gender, and class.

The Debate Over Women's Roles in Public

Barnum's American Museum and its Lecture Room were one of the few public spaces in antebellum New York City where middle-class women felt comfortable appearing unescorted by men. During the early decades of the nineteenth century, although they could not vote and were barred from many forms of employment, women-- especially middle-class, white women--became culturally prominent as the guardians of the nation's social and moral life in their roles as wives and mothers. Many women extended these responsibilities beyond the private realm of the family by joining or starting reform organizations to promote temperance, abolish slavery, curb prostitution, and extend women’s rights. This activity for high school or college students explores debates over public roles for women.

This exercise offers one model for how to use The Lost Museum in a U.S. history classroom. Developed by Professor Michael O’Malley of George Mason University, it provides guiding questions for students as they explore the museum’s rooms and archive. In particular, O’Malley steers students through an analysis of Barnum’s presentation of the FeJee Mermaid and its possible meanings in antebellum American society.

The news of John Brown's attempted raid on a federal arsenal and subsequent execution in Charlestown, Virginia, stirred passionate reactions throughout the country and across the political spectrum. In this activity, students can examine a range of reactions to Brown and his methods and, in the process, explore more general questions about the role of violence in movements for social change. They will begin by analyzing a classic 1857 quotation from Frederick Douglass on the nature of social change. Then, in a persuasive essay, they will evaluate Douglass's statement in light of debates that occurred two years later over John Brown and his methods at Harpers Ferry.