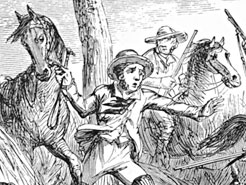 The most famous American novel of the nineteenth century, Harriet Beecher Stowe’s Uncle Tom’s Cabin was first published in 1852 in serial form in the abolitionist newspaper National Era. Stowe’s novel sold an astonishing 300,000 copies in its first year, and was read by more than one million people by the time slavery was abolished. The sentimental novel, which told the tale of runaway slaves, a cruel overseer, and the effect of slavery on families, galvanized slavery’s critics and enraged its defenders. Quickly adapted for the stage by George Aiken, many more theatrical (and later film) versions of Stowe’s story occupied American culture throughout the 1850s and beyond, from the “Tom Shows” of the post Civil War years to vaudeville and silent films in the early twentieth century. Many stage and screen versions were little better than minstrel show presentations, and virtually all were performed by white performers in blackface makeup.

The version of Uncle Tom’s Cabin (adapted by H. J. Conway) that played at the American Museum’s Lecture Room in 1853 artfully undercut the novel’s strong abolitionist politics and instead promoted sectional compromise. Because existing U.S. copyright law did not grant authors control over adaptations of their work, Stowe could only look on in horror at the many versions of her story. Uncle Tom’s Cabin was not the only Lecture Room drama to take on the politically charged topic of slavery; Barnum also presented Dred, a theatrical adaptation of another Stowe novel, and The Octoroon, by Louisiana playwright Dion Bouccicault. All three plays sparked heated debate over the question of abolition and the intersection of politics and theatre. But Barnum was careful to move with changing political tides, and by 1856 George L. Aiken’s more faithfully abolitionist adaptation of Uncle Tom’s Cabin had replaced Conway’s anti-abolitionist version on the Lecture Room stage.

Harriet Beecher Stowe’s 1852 novel Uncle Tom’s Cabin polarized national opinion like few other cultural creations before or since. Abolitionists embraced the book’s anti-slavery message, while pro-slavery southerners reviled it as distorted, malicious, and false. This unsigned review from the Southern Press Review maintains that fiction should not be taken seriously as a forum for reasoned argument and argues a familiar pro-slavery message, that the risks and dangers of free labor caused as much damage and distress to families as slavery.

In 1856, the Lecture Room presented a production of Dred, based on a novel of the same name by Harriet Beecher Stowe and adapted for the stage by H.J. Conway. Dred, even more than Uncle Tom’s Cabin, was a scathingly antislavery novel. This review of the play from the New York Tribune enumerates Conway’s many changes to Stowe’s story and suggests the ways in which Conway softened Stowe’s starkly anti-southern message. The Tribune, while sympathetic to the antislavery cause, nonetheless lauded Conway’s adaptation and declared this production of Dred “worth seeing.” Dred proved yet another example of Barnum’s ability to present current political and social topics at the American Museum that attracted rather than offended large segments of his audience.

When Dion Boucicault’s The Octoroon opened in New York in 1859 in the wake of John Brown’s raid on Harpers Ferry, the highly charged sectional atmosphere that gripped the nation ensured that a play about slaves and slavery would be imbued with political meaning far beyond that originally intended by the author. Some viewed Boucicault’s play as a patently abolitionist work, while others reviled its pro-slavery sympathies. In these two letters, originally printed in the New Orleans Picayune newspaper and reprinted by the New York Times, the Anglo-Irish Boucicault sought to impress upon southerners that he had intended The Octoroon to paint a picture of southern plantation life and nothing more, and denied that he had set out to send any sort of political message.

When Dion Boucicault’s tragedy The Octoroon (set on a southern plantation) opened in December of 1859, many viewed the play as sectional propaganda; there was widespread disagreement, however, concerning the side for which the play argued. This New York Times article cautions its readers against jumping to conclusions about Boucicault’s intentions in the writing of the play and downplays the work’s political significance. Yet the author also seems to understand that the suggestion that not everything is a political statement is unrealistic, given the fever pitch of sectional tension that wracked the U.S. in the weeks following John Brown’s execution. For this reason, and despite the warnings of the Times, the author concluded that the New York audience was bound to “insist on rewriting the piece according to its own notions,” ascribing to the play political importance far beyond Boucicault’s design.

For a brief time in 1853, New Yorkers seeking a stage production of Harriet Beecher Stowe’s Uncle Tom’s Cabinhad two choices. The first, a dramatization by George Aiken that ran at the National Theatre, was generally faithful to the novel and maintained its pointedly anti-slavery message. The second, an adaptation by H.J. Conway staged in the American Museum’s Lecture Room, promoted sectional understanding and compromise at the expense of the abolitionist message that was at the heart of Stowe’s novel. In an era before copyright protection for published works, adapters were free to alter Stowe’s famous novel in any way they wished, leaving the horrified author no recourse against the numerous theatrical versions of Uncle Tom’s Cabin. This review from the abolitionist New-York Tribune newspaper warns its readers against the Conway adaptation at the American Museum.

A staunchly abolitionist newspaper, the New-York Tribune, not surprisingly, had little positive to say when it reviewed the American Museum’s theatrical production of Uncle Tom’s Cabin. Barnum, keenly sensitive to public opinion, revised most of the production’s elements that the Tribune’s reviewer had found objectionable, and succeeded in persuading the newspaper to take a second look. As this brief second review attests, Barnum’s efforts successfully won over the Tribune. It also reflects the fluid nature of nineteenth-century theater, where improvisation and adaptation to fit audiences’ varied tastes were more common than rigid adherence to a single script.

Harriet Beecher Stowe’s explosive 1852 novel Uncle Tom’s Cabin first appeared in print in serial form, in the anti-slavery journal The National Era. This announcement advertises the novel by touting its phenomenal popularity and quoting at length from a religious journal’s favorable review. The review conveys the attitude of many ardent abolitionists, who saw the book as a truthful depiction of slavery and a powerful weapon in the struggle to abolish it. The review insists that Stowe’s novel is so moving, any human being who can read it without weeping would be exceptional enough to exhibit in the American Museum.

Harriet Beecher Stowe was born in 1811, the seventh child of Congregational minister and reformer Lyman Beecher. Her novel Uncle Tom’s Cabin, or, Life Among the Lowly, a melodramatic story of slavery and slave-hunters, was first published beginning in 1851 as a ten-month serial in the National Era, an abolitionist newspaper. Uncle Tom’s Cabin was the most influential novel in U.S. history, galvanizing northern public opinion against slavery and enraging southern slaveholders who believed they had been unfairly maligned. Published in book form in 1852, it quickly sold 300,000 copies, and eventually sold 7 million copies worldwide. Although it was a novel, northerners widely considered Uncle Tom’s Cabin to be a truthful account. Southern critics disagreed, charging that Stowe had fabricated (or at least exaggerated) her tale, and in 1854 Stowe published The Key to Uncle Tom’s Cabin, which cited real-life sources for the characters and incidents in the novel.

This image was one of 27 woodcuts that appeared in the first British illustrated edition of Uncle Tom's Cabin, published in 1853. Created by the internationally-known illustrator George Cruikshank, it bore the caption "Scipio Hunted, 'As Men Hunt a Deer!'" From its first edition onward, Stowe's novel contained illustrations that gave readers powerful visual details to bolster her anti-slavery story.

This review of the American Museum’s Lecture Room production of Uncle Tom’s Cabin appeared in the Illustrated News, a weekly newspaper of which P. T. Barnum was an owner. Not surprisingly, it is glowing in its praise of the production, from H. J. Conway’s adaptation of Harriet Beecher Stowe’s novel to the actors to the scenic effects. The anonymous author, quite likely Barnum himself, concludes by reassuring readers nervous about the novel’s anti-slavery politics that the production contains “not a single word calculated to offend those whose opinions on this topic favor its non-agitation.”