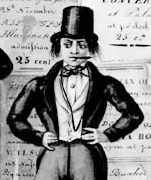 For two decades in pre Civil War New York City, the Bowery b’hoy (and his “g’hal”) were icons of working-class high spirits and urban America’s feisty democratic culture. A main east side thoroughfare, by the late 1830s the Bowery was best known for its entertainment possibilities, which included cheap dancehalls, dime museums, billiard salons, rowdy theaters, performing animals, and boxing. The Bowery b’hoy was based on the dress and behavior of actual New Yorkers, but he became famous as a character “type” depicted in print and onstage, a symbolic figure that represented the rise of commercial culture and decline in the status of skilled trades that were altering social relations in the mid-nineteenth century city. Lampooning the dress and manners of the aristocracy, the Bowery characters provided ample material for, in historian Peter Buckley’s words, the “comedy of a culture in rapid transition.” Under Barnum’s proprietorship in the 1840s and early 1850s, the American Museum presented sensational exhibits and raucous entertainments that attracted a working-class, Bowery crowd. But Barnum increasingly attempted to attract a more respectable audience of middle-class men, women, and children to the Museum, replacing blackface minstrel shows with moral dramas on the stage and banning alcohol in favor of ice water on the refreshment stand.

This description of a visit to the American Museum appeared as a chapter in Doesticks, a chronicle of the New York City adventures of the eponymous author, "Q.K. Philander Doesticks," the pen name of humorist and journalist Mortimer Neal Thompson. Tales of travels and adventures were popular among antebellum readers, and Doesticks (published in 1855) provides a satire of the genre. In this excerpt, filled with double entendres and sly asides, Doesticks deftly satirizes the volume and variety of Barnum's attractions. By the 1850s Barnum was attempting to draw a more "respectable" middle-class audience in addition to the working-class Bowery crowd that filled the American Museum during the 1840s. The concluding parody, of a Lecture Room drama featuring Mose the "jealous fireman" and his girlfriend Rose (archetypes of the period's working-class entertainment), Doesticks implies that raucous Bowery culture is still a strong presence in Barnum's now "respectable" American Museum.

The Soaplocks, or Bowery Boys

This 1847 watercolor depicted the young men who habituated New York's working-class entertainment area, the Bowery. They wore the fashionable long sideburns that gave them the nickname "soaplocks." Around them, posters advertised some of the Bowery attractions the "B'hoys" attended after their workday ended.

Mose and Lize on the 3rd Avenue, N.Y.

This 1848 print showed the exuberant style of dress and behavior favored by many young working-class women. Although Lize (like her boyfriend Mose, the celebrated "fire laddie") was a fictional character, her popularity in the press and theater suggested that the principles of Domestic Science and separate spheres did not represent the ideal for all young women.

After 1850, Barnum’s Lecture Room stage hosted a series of productions explicitly designed to elevate virtue and stamp out vice. This review describes a performance of The Drunkard, the most successful "moral drama" ever run in the Lecture Room. The temperance play presented the protagonist’s descent into the depths of depravity and alcoholism, and his eventual recovery and rebirth. The review also discusses one of the more interesting features of theatre presented in the Lecture Room; the exhibition of human oddities between the acts (and even within the play). The combination highlights Barnum’s efforts throughout the decade to attract an upper-class audience with polite, female-friendly moral drama, while continuing to cater to a working-class Bowery crowd with the inclusion of the bawdy “freak” show. The “nigger chap who is turning himself white,” is an early example of Barnum’s penchant for blurring the accepted racial binary, later manifested in attractions such as the “What Is It?”

Urban Popular Culture in the Age of Barnum

This 900-word essay describes the vibrant new forms of popular culture that developed in the growing cities of the antebellum U.S. The explosive growth of live entertainment and print culture included, but was hardly limited to, Barnum's American Museum, and incorporated elements of celebrity and international transmission that are still familiar today.

In late August of 1835, readers of the New-York Sun encountered an incredible story in its pages. The newspaper was among the inexpensive “penny press” that began publication during the 1830s and drew a large new readership with lower prices and a more narrative style of journalism than earlier newspapers. The Sunreported that the British astronomer Sir John Herschel had created a telescope “of vast dimensions and an entirely new principle” that enabled him to see life on the moon. In a series spread over six days, the Sun provided an exhaustively detailed description of Herschel’s telescope and its extraterrestrial discoveries. Although it was derided by other newspapers as a hoax, the Sun never admitted that the moon story was untrue. This excerpt describes the life forms on the moon allegedly visible through Herschel’s telescope.

The character of Mose first appeared on the New York stage in Benjamin Baker’s A Glance at New York, in 1848. A volunteer fire fighter, or “fire laddie,” Mose was a larger-than-life character who thrilled working-class Bowery audiences with his street fighting and fire rescue exploits. More plays featuring Mose, written by Baker and others, soon became a popular theatrical staple in New York. This photograph is of the actor Frank Chanfrau, who originated the role of Mose. The fictional Mose was based on the real-life Moses Humphrey, a printer at the New York Sun newspaper and member of Fire Company 40. Frank Chanfrau’s brother, Henry Chanfrau, was said to have famously defeated Humphrey in an 1838 fight, driving the printer out of New York City in shame.

In 1836, the brutal murder of Helen Jewett shocked New Yorkers. An attractive young woman from Maine, Jewett was working as a prostitute in Manhattan when she was slashed and burned in her bed in the early morning hours of April 10. While the growing incidence of crime and prostitution appalled the middle class, the mass-circulation “penny press” had a field day covering this gruesome story for their largely working-class readers.

As this 1852 lithograph indicates, it was often hard to tell where the performance really was situated in popular urban theaters. The raucous audience in this print included an aggressively critical German immigrant (in the center wearing a hat) and an artisan fire “laddie” preoccupied with a hasty meal (on the left). Until the mid nineteenth century, a theatre’s houselights could not be easily dimmed during performances, rendering audience members as visible to each other as the action on the stage. According to historian Peter Buckley, antebellum theatrical audiences regularly interacted with performers of familiar “stock” repertory by correcting lines or interjecting comments, as the text below the image suggests.