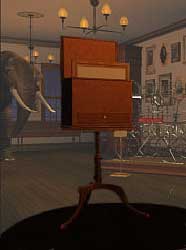 Decades before the advent of motion pictures, or even electricity, showmen like P. T. Barnum used all manner of technology to dazzle nineteenth-century audiences. The American Museum’s Lecture Room employed the latest stagecraft—including lavishly painted backdrops and mechanical and pyrotechnic displays onstage—to add spectacle to its moral dramas. The museum also displayed automata that imitated human and animal behavior and lantern slide shows, cosmoramas, and panoramas that presented images in new ways. While the Portable Seriate Slide Cabinet (which offers visitors to the virtual American Museum a short history of "The Slave Owner Conspiracy") did not actually exist, it represents the kinds of innovative presentational technologies that Barnum regularly used. At the American Museum and other nineteenth-century sites of public amusement, technology and entertainment went hand in hand.

This website sponsored by the Getty Museum, supplementing a 2001-2002 exhibition, demonstrates a range of ingenious machines invented to augment visual perception and convey an illusion of reality. Spanning many centuries and including devices such as android automata, lunar landscapes, perspective theaters, vues doptique, microscopes, magnetic games, magic lanterns, and camera obscuras, each represented the new media of their day and a number found their way into Barnum's American Museum.

Humans have long been fascinated with mechanical devices that mimic human and animal behavior; the simplest date back to medieval times, and they were frequently used to provide entertainment at royal courts. By the eighteenth and nineteenth centuries, inventors had created a range of automata, including automatic flute players, jugglers, singing birds, mechanical theatres and puppet shows, and all manner of animated clocks. Like many other showmen in Europe and America, Barnum recognized automata’s popular combination of science and illusion. While not exhibited at the American Museum, this automaton writer was created by Swiss clockmaker Henri-Louis Jaquet-Droz and first displayed in 1774. With pad, pen, and inkwell, this automaton was capable of writing any phrase of up to 40 letters.

Wolfgang von Kempelen’s mechanical chess player was one of the most famous automata of all time. The automaton, produced in 1770, bested a host of chess experts, European royals, and celebrities in live chess matches. The automaton chess player fascinated the public because it not only imitated human behavior, it appeared to be a “thinking machine.” German inventor and showman Johann Maelzel brought the device to the U.S. in 1826, where it sparked heated debates among audiences and journalists about the mystery of its operation (an 1837 newspaper expose revealed the presence of an assistant concealed inside the cabinet). Barnum claimed that Malezel—through his use of the press to inspire public conversation about the attraction’s relative authenticity and deception—influenced his own career as a showman. A fire at the Chinese Museum in Philadelphia in 1854 destroyed the automaton chess player.

This production of Ring of Fate at the Lecture Room employed state-of-the-art stage technology, including a moving panorama, “calcium and gas effects,” and exotic scenery. Ring of Fate was a “fairy show,” a genre that featured supernatural spectacles and was popular with mid-nineteenth-century audiences. This advertisement was typical of the era’s theatrical advertising in its detailed listing of performers, songs, scenes, and even scenery.