Phrenology represented an early attempt to understand the mind and human behavior by linking personality traits or "faculties" to the physical organ of the brain. Phrenologists divided the mind into 35 "faculties" that were ascribed to specific parts of the brain and locations on the cranium, the size and shape of which determined the strength or weakness of each trait. This chart of the head, from Ladies Magazine 1833, was a common sight in pharmacies, magazines, and books. It was also painted on plaster or porcelain busts and carried about by the thousands of phrenologists who crisscrossed the country in the antebellum period 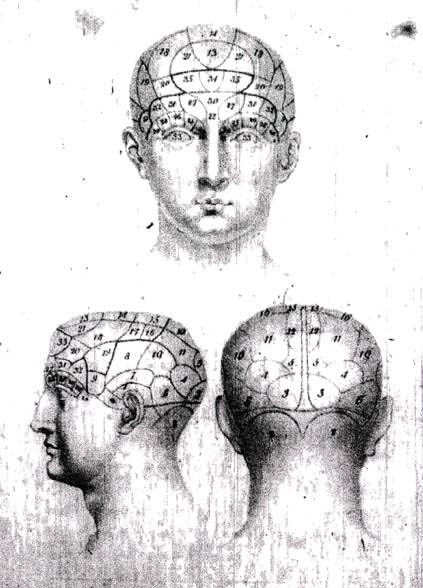 EXPLANATIONS OF THE PLATE.

The head is divided by phrenologists into four regions-viz. occipital, the back part-lateral, the side-frontal, the forehead-sincipital, the top, or crown of the head

SPECIFIC NATURE OF THE DIFFERENT FACULTIES OR ORGANS.

*Alimentiveness-the instinct to take food. This cerebral part is developed early, and is larger in youth than in adult age, except in those persons whose dearest pleasure, all their lives, consists in eating.

The organ is situated before the ear.

The organ of causality is situated by the sides of comparison.

Temperament is the bodily constitution. Phrenologists admit that the temperament of an individual, influences his mental powers, giving more or less activity and perfection to the fundamental faculties.