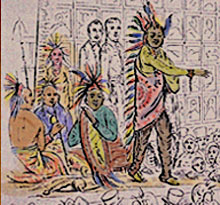 Wagon trains began carrying emigrants into the American West during the 1830s, and by 1869, when the first transcontinental railroad was completed, as many as 350,000 Americans had moved toward the Pacific. This movement of people to a variety of frontier destinations from Texas and Kansas to California and Oregon, created conflict over the spread of slavery and wholesale displacement of the native tribes whose land was now sought by new settlers. The promise of individual land ownership embodied in the 1862 Homestead Act was often subverted by land speculators. Despite such harsh realities, the settling of the frontier also engendered a romantic vision. Those who remained behind eagerly consumed artifacts and accounts of the westward journeys of others. The American Museum catered to this fascination with exhibits ranging from the foolish (Colonel Fremont’s fictional “wooly horse”) to the supposedly anthropological (the “Ioway Indians”). The writer and promoter George Catlin also catered to this interest in all things western with ethnographic paintings and lectures about the fast disappearing Plains Indian tribes.

Barnum on the Woolly Horse, The Life of P. T. Barnum, Written by Himself, 1855

In the winter of 1849, John C. Fremont—a celebrated Army explorer who had spent the 1840s leading expeditions through the uncharted American West—was surveying a possible railroad route from the Rio Grande river to California. (Fremont, who in 1846 helped to lead an uprising by Anglo settlers in California against Mexican authorities that eventually led to California statehood, went on to become the Republican candidate for President in 1856.) The temporary disappearance of Fremont’s party of explorers provided P. T. Barnum with the opportunity to create another “humbug” for public consumption. In this passage from his autobiography, Barnum describes how he acquired the “ambiguous quadruped,” waited for a suitably astonishing story to attach to its origins, then combined the two and exhibited Fremont’s “Woolly Horse.”

In the 1830s, lawyer and artist George Catlin spent eight years traveling through the Great Plains and Far West documenting Indian life in hundreds of paintings and extensive writings. His ethnographic efforts coincided with the forced relocation of thousands of eastern Indians to lands west of the Mississippi, a devastating exodus known as the Trail of Tears. To support his travels and pictorial chronicles, Catlin sold Indian artifacts, toured exhibitions of his paintings, lectured, and promoted “Wild West” shows. Catlin considered himself an advocate of Indian cultures, yet his highly romanticized portrayal of Indian life downplayed the devastating impact of European diseases and white settler encroachment on Indian lands. In this excerpt from the last letter in his two volume set of Letters and Notes on the Manners, Customs, and Conditions of the North American Indians, Catlin reflects on his experiences and accomplishments and expresses his thoughts on the current state of Indian cultures.

An Iowa Addressing a London Audience in Catlin's Indian Gallery

After spending eight years traveling through the American West documenting Indian life, the Pennsylvania-born George Catlin took his artwork and artifacts on tour to Europe in 1840. Catlin tried to make a living displaying his paintings throughout England and France, but high expenses and limited interest meant he had to continually fuel public attention by hiring locals to dress as Indians and staging reenactments of war scenes. Then in 1843 a group of traveling Ojibwe contacted Catlin and joined his exhibition for a short period, soon to be followed by fourteen Iowa who toured with him in 1844 and 1845. In this print Catlin portrays Se-non-ti-yah, an Iowa medicine man, speaking to a London audience, which he did regularly while touring with Catlin.

Iowa Indians at the American Museum, 1843

This letter from P. T. Barnum to Moses Kimball describes the 1843 exhibition at the American Museum of a group of Iowa Indians. Barnum and Kimball, proprietor of the Boston Museum, maintained a regular correspondence like this, where they shared information and advice about their exhibits. The westward-moving efforts of white settlers to gain Indian lands began in the late eighteenth century and was codified by the Indian Removal Act, passed by Congress in 1830, which forced a range of native tribes to exchange their ancestral lands for reservations located west of the Mississippi. Barnum’s casual racism, and the very fact of his exhibiting representatives of an American Indian tribe, suggest the cultural transformation that accompanied Indian removal: Native Americans became less a threat and more a curiosity.

George Catlin, trained as a lawyer, abandoned that profession in the 1830s to travel the American frontier West sketching and painting the Indian tribes he encountered in territory that would later become Nebraska. This painting of a young girl is unusual among Catlin’s works, as he tended to depict mostly men; she was the daughter of an Arikara chief.

In 1832, George Catlin painted this portrait of the Chief of the Blackfoot, a northern Plains tribe. It was one of several that Catlin painted throughout the 1830s, as he traveled the frontier West documenting the tribes that were being driven from their lands by the U.S. government and the pressure of increased American settlement. This portrait exhibits Catlin’s characteristic precise detail of costume and bodily decoration.

Campfire Stories with George Catlin: An Encounter of Two Cultures

This award-winning site by the Smithsonian Institution is designed for students and contains Catlin’s paintings and recorded interviews with scholars. The site is organized around four main themes: Indian Removal from Ancestral Lands; Catlin's Quest; Chiefs and Leaders; and the Western Landscape.