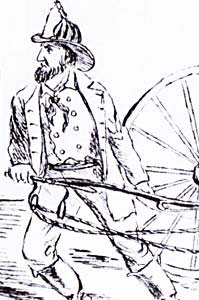 Fire fighting in the mid-nineteenth century was a dangerous, difficult, labor-intensive, and often unsuccessful endeavor. Gas lighting, high-density wooden structures, and hand-operated water pumps in New York City meant fires spread easily and burning buildings collapsed injuring residents and firemen before the fires could be controlled. When Barnum’s American Museum burned in July 1865, the State legislature was initiating a major change in New York City’s fire department from a volunteer to a paid system. Since the 1790s firemen were organized into an official voluntary system that allowed release from military and jury duty as the only compensation. As volunteer fire companies replaced bucket brigades in the 1820s, the force drew larger numbers of young working class men as fire "laddies," and the fire houses became social clubs. The sense of community and pride in the skills and stamina needed to fight fires, as well as the opportunity for political patronage, created loyal cadres of fire companies throughout the city each with their own distinctive name and insignia. Each company had a strong following of neighborhood boys who would run to the fire houses whenever the fire bells rang to assist in dragging the heavy machinery through the streets. The volunteer fire companies often competed with one another to be the first to a fire or the most efficient in putting it out. By the mid-nineteenth century these competitions had become infamous for their rowdiness and many middle-class reformers as well as insurance companies advocated for a professional fire department following the model of the recently professionalized police department. Much of the pressure for the paid fire department came from Republican Party supporters who viewed the Irish immigrant fire laddies as Democratic Party supporters and wanted a state-run fire commission that would give the Republicans in the State legislature more political leverage in the city. The move to horse-drawn, steam-powered pumpers in the 1850s reduced the need for large numbers of volunteers and made a smaller, paid force feasible.

In this magazine article Charles Dickens capture the spirit and lore of the volunteer fire companies in the mid-nineteenth century. The camaraderie, youthfulness, and heroism of the fire "laddies" as portrayed by Dickens contrasted sharply with the growing criticism of the volunteer fire department as undisciplined street gangs that used fire fighting as an excuse to fight one another. New York City insurance companies, middle-class reformers, and Republican Party supporters all argued for eliminating the volunteer system that attracted young working-class Irish immigrants and provided a based for local Democratic Party organizing. In 1865, the State legislature replaced the 4,000 volunteer firemen with a much smaller paid fire department.

By the close of the Civil War, the volunteer fire companies were on their way out in New York. These two articles from the New York Times may be read as a list of middle-class New York's grievances with the volunteer companies. Besides their economic inefficiency and poor record for saving buildings, the Times describes "the shrieking, yelling, hallooing, confusion" that had come to attend the process of putting out a fire, as well as the propensity towards drunkenness, rowdiness, and larceny displayed by the volunteers. The campaign to institute paid fire companies reflects the anti-Irish, anti-working class sentiment common among the middle classes in New York during this period, as well as foreshadowing later civic reform movements designed to clean up the city, both physically and morally.

"Why New York City Should Have a Paid Fire Department," 1865

Insurance companies, civil and moral reform organizations, and the Republican Party were among the groups most active in lobbying for the creation of a paid fire-fighting force; this anonymous 1865 pamphlet focuses on the charges against the volunteer companies that would have been of the most interest to these special interests. There is a clear anti-immigrant tone running through the text, as evidenced in the claim that in the last 20 years, the fire companies had turned from an important, effective, respectable institution into “a rotting mass of festering corruption.” Not surprisingly, in the same 20 years, the fire companies had become almost completely Irish. Because Irish immigrants formed the largest Democratic voting bloc in the country, the creation of a professional fire squad would have eliminated the pro-Democratic voting corruption that this pamphlet alleges was endemic to the volunteer companies, thereby aiding the Republicans.

When the New York State Court of Appeals upheld the constitutionality of a professional fire squad in July 1865, the era of the volunteer fire companies was over. It remained to be seen, however, how smooth the transition from a force over 4,000 volunteers to a force of 400 professional men could be. Initially, the volunteer fire companies responded with outrage, increased inter-departmental fighting at fires, and by threatening to discontinue work completely, leaving the city with no fire protection until the professional force could be assembled in 1866. However, after being assured that all members of the volunteer squads would maintain their firefighter’s exemption from the military and from jury duty, the volunteer companies voted to remain on call until the transition to professionals could be completed. This series of articles from the New York Times provides a chronological account of this transition.

This lighthearted 1907 article from the New York Sun recalls the days before the advent of the professional fire squad, when, according to a volunteer named Marty Keese, "your fire company was your religion." The article traces the rise and fall of the volunteer companies in the esteem of the city from the days when heroism in a fire company was a sure jumpin-off point for a career in city politics, to the last days of the institution, when rival companies were as likely to brawl as they were to put out a fire. The article pays particular notice to the 1865 fire that destroyed Barnum's museum. The American Museum fire, which was one of the last major blazes on which the volunteer companies worked, was enlivened by the (ultimately futile) attempt to save a seal and a white whale from the burning building.