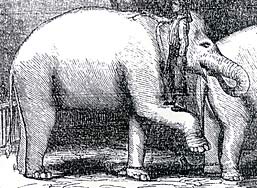 Barnum decorated his American Museum with huge pictures of animals to draw in crowds eager to see exotic animals before the common exhibition of animals in zoos and circuses. While Barnum stressed his contribution to increased understanding of natural history by exhibiting exotic animals from around the world, the promotion of the animal exhibits relied on sensationalism as much as education. Ads and newspaper coverage often highlighted the difficulties in capturing animals as well as their fragility in captivity. The Happy Family Display claimed that the wide range of animals enclosed in one case, including natural predators and their prey, lived in harmony. In 1866, Barnum’s new museum drew the attention of the newly formed American Society for the Prevention of Cruelty to Animals. The ASPCA director Henry Bergh objected to the public feeding of live rabbits to snakes.

In the summer of 1861, Barnum trumpeted his latest American Museum exhibit: two live white (or beluga) whales. This newspaper report on the arrival of the whales reflects the excitement and wonder that, in an era before zoos, New Yorkers might have felt at seeing live animals in captivity. This was Barnum's first attempt to exhibit live whales (the museum was on its eighth and ninth whales when it burned down in 1865), and his promotion of the animals highlighted the enormous undertaking of capturing them in Canada and transporting them New York.

In an era before the common exhibition of animals in zoos and circuses, the arrival of "two living white whales" in lower Manhattan was a noteworthy event. While other natural history museums of the period tried to present animals with images of their natural habitats and avoided mention of their capture, the American Museum often stressed the opposite. The animals themselves, as well as their natural habitats and habits, frequently paled in comparison to Barnum's heroic tales of acquisition. In the case of the beluga whales, the exhibit highlighted the elaborate process of their capture and transportation to New York. Barnum spurred attendance with hints, born out by past experience, that the whales might not survive for long in captivity.

Letters Between P. T. Barnum and Henry Bergh of the ASPCA

After Barnum's American Museum burned in 1865, he opened a new museum and menagerie several blocks to the north. Shortly after the founding of the American Society for the Prevention of Cruelty to Animals in 1866, its President, Henry Bergh, responded to complaints that staff fed live rabbits to boa constrictors in the new museum as a source of entertainment. The following letters reveal the growing tensions between Bergh and Barnum. The New York World published the Bergh and Barnum letters on March 19, 1867, commenting that "the snake controversy is funny as well as instructive." As Barnum's final letter to the Evening Post makes clear, other publications took up the issue in order to poke fun at Bergh.

Barnum promoted the educational value of the American Museum and stressed his contribution to increased understanding of natural history by exhibiting exotic animals from around the world. But the animals and their natural habitats and habits often paled in comparison to Barnum's heroic tales of acquisition. Barnum used newspaper and magazine stories about the capture of wild animals to draw visitors to the Museum and to his sporadic travelling menageries. These acquisition stories, such as this long description of the capture of Asian elephants, emphasized the dangers, efforts, and expenditures that Barnum undertook to obtain the exotic beasts rather than scientific information about the animals themselves.

Ever the innovative showman, in February, 1854, Barnum staged “The National Poultry Show” at the American Museum. The unusual exhibition brought the everyday of rural life into the burgeoning city, awarding cash prizes for the finest birds. This newspaper item treated the event with amusement, although it undoubtedly served to draw visitors through the American Museum’s doors and added to Barnum’s reputation for ingenious showmanship.

In late October, 1854, Barnum announced the American Museum’s second “Great Poultry Show” of the year (the first was held in February). The week-long event transformed, in quintessential Barnum fashion, an otherwise routine agricultural market transaction into an opportunity for spectacle and hyperbole. Advertisements invited the public to inspect the “all foreign and just imported” fowl, “the rarest,” “costliest,” and “pure-bred” birds before they were auctioned off and “distributed throughout our country.” This sheet music cover commemorated the show. The following year, Barnum moved from exhibiting poultry to children when he presented the “National Baby Show” at the American Museum.

Correspondence between Henry Bergh, the founder of the Society for the Prevention of Cruelty to Animals, and P.T. Barnum received wide distribution in the press as a way to poke fun at Bergh's views. As this letter illustrates, some of Bergh's supporters found all of Barnum's animal exhibits at the museum objectionable. This transcription of excerpts from a letter to Bergh is from the ASPCA archive. The original letter in full and with signature is no longer available, we recreated the handwritten document found on Barnum's desk in The Lost Museum.