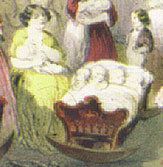 The “National Baby Show” was one of the American Museum’s most popular competitions. The first baby show in June 1855 attracted more than 60,000 patrons eager to view the 143 contestants who were to be judged “especially on the crowning merit of their being genuine original American stock” (omitting from the competition infants deemed too poor or “foreign” in appearance). Following up on his success in New York, Barnum quickly staged baby shows in several other cities. Despite Barnum’s attempts to portray the shows as grounded in scientific inquiry (contestants answered questions about hygiene, diet, and exercise), many middle-class observers questioned the propriety of displaying mothers and children for commercial gain.

The Baby Show poster hanging on the wall of the “Picture Gallery” in The Lost Museum is a composite of images and text from primary sources.

Prize and No Prize, or What's a Baby? Infantine and Maternal Jealousy, New York Picayune

Barnum staged baby shows in several cities, and they were, for a few months, a national craze, drawing widespread popular and press attention. But many criticized the baby shows for crassly publicizing the private female world of home and motherhood. In the words of one female commentator, "There is something intrinsically revolting in this attempt to force aside the veil which screens and protects the chaste matron, where she and her 'pretty brood' within the sanctuary of home are exempt from the rude gaze of a prying curiosity." These illustrations are an example of the public scrutiny and mockery that critics feared.

Baby Show Advertisement in the New York Tribune, May 1863

P.T. Barnum placed advertisements in many of the most popular newspapers of the day, sometimes highlighting a specific exhibit. This full column ad promoted his National Baby Show that began on Monday, May 11th, and ended Saturday, May 16th, 1863.

Letters About the Baby Shows to the New York Tribune, May 1855

Barnum's phenomenally popular baby shows, staged at the American Museum in New York and in several other cities in 1855, reflected many antebellum attitudes about race, gender, and class. In this exchange of letters, published in the New York Tribune newspaper, a correspondent asks Barnum if African-American babies will be allowed to compete in the upcoming baby contests. Barnum replies that he will follow accepted social custom for the time, which called for strict segregation of the races. Barnum never staged any baby shows for African-American children, although other showmen subsequently presented "Colored Baby Shows" that closely imitated Barnum's original.

While the American Museum appealed to a working-class crowd during the 1840s, by the 1850s Barnum was working aggressively to attract a more respectable middle-class audience, including women, to the Museum. The phenomenally popular baby shows marked an intersection of these dual constituencies. Many middle-class observers harshly criticized the baby shows for desecrating "the sanctities of home and of life." Scholar Bluford Adams contends that Barnum, while answering his critics, also deliberately appealed to native-born, working-class contestants and audiences. But as this excerpt from the New York Herald reveals, perhaps not all working-class mothers and babies were welcome at the baby show.

This article from the U.S. Democratic Review, the leading journal of the Democratic party, assailed Barnum's baby show before it had even happened, on the basis of advertisements and Barnum's reputation for fakery. It begins by sarcastically defending the baby shows and concludes with a harsh condemnation of the proposed show and an exhortation to the "Mothers of America" to shun the contest.

Barnum's June, 1855 baby show at the American Museum was phenomenally popular and controversial, and newspapers reported on it in great detail, providing further publicity. This article was one of several from the New York Times. It contains a wealth of detail: vivid descriptions of the scene, overheard conversations, and partial lists of contestants, plus complete lists of the judges; the categories and their cash prizes; and the questions posed to prospective entrants.

Barnum's baby show was both popular and controversial, and local newspapers reported on it in great detail, providing further publicity. This article was one of several from the New York Times. Its vivid and detailed descriptions convey both a palpable sense of the show (and the Museum's) atmosphere and specific insights into such antebellum issues as immigration, the politics of the union, and urban poverty.

While Barnum's baby show was drawing hundreds of contestants and thousands of spectators, it was also drawing criticism. This commentary is from the New York Tribune, which frequently criticized Barnum in its pages. The unnamed author objects to the association of children with public commerce and with the American Museum's other exhibits, which included wild animals and human freaks.

With the success of the June, 1855, baby show at the American Museum, Barnum quickly staged similar shows in a number of other cities, building on his success in New York and his national reputation as a showman. This advertisement for the Boston baby show reflects Barnum's practiced strategies for generating community-wide attention and attendance.

By the 1850s, Barnum was attempting to draw "respectable" middle-class audiences, (including women and children) to the American Museum. But his 1855 baby contests generated a wave of criticism from the very constituency he was seeking to attract, as middle-class commentators, male and female, denounced Barnum's shows as crass and degrading to women. This excerpt from Godey's Lady's Book, a magazine popular among middle-class women, demonstrates the gender-based arguments some critics made about the baby shows.

This humorous account of the chaotic scene at Barnum's baby show appeared as a chapter in Doesticks, a chronicle of the New York City adventures of the eponymous author, "Q.K. Philander Doesticks," the pen name of humorist and journalist Mortimer Neal Thompson. Thompson wrote for the New York Tribune beginning in 1855 where his anti-slavery verse and prose, and later Civil War reports from the field, attracted wide attention. Tales of travels and adventures were popular among antebellum readers, and Doesticks, published in 1855, seems to be a satire of the genre. While obviously exaggerated, narrator Damphool's description of his visit to the baby show provides a vivid sense of what it might have been like to visit the American Museum.

Barnum revived his baby shows in 1862, prompting this satire in the humor magazine Vanity Fair. This piece builds on readers' memories of the public commotion and controversy incited by the 1855 shows and jokingly predicts a similar commercial frenzy for the latest version. It also uses the baby show to mock the abolition movement.

Barnum revived his baby shows in 1862, prompting this satire in the humor magazine Vanity Fair. Like earlier descriptions of the baby shows, this essay found humor in the juxtaposition of the babies with Barnum's other infamous exhibits. It also aims barbs at Barnum's support for abolition and the abolitionist movement in general, and seems to refer obliquely to controversies surrounding the earlier baby shows ("Paterfamilias" was the pen name of a Cincinnati critic in 1855).

When critics decried his "Grand National Baby Show" as a crass exploitation of the venerated—and private—maternal sphere, Barnum responded by presenting a lecture by Dr. Lydia Folger Fowler. Fowler was an author and lecturer, the second woman in the U.S. to receive a medical degree, and the first woman professor in an American medical college. Her endorsement of the baby show conferred both medical legitimacy and the sanction of a highly educated, respectable woman. This newspaper account describes her baby-show lecture and the enthusiasm with which she was received by an overflowing Lecture Room audience.

This article describes the "Grand National Baby Show" held at the American Museum in 1855. Like much of the newspaper coverage of the baby show, it pokes fun at the exhibition itself and at the parents and children who came to participate in it. This article also derides the scientific pretensions that Barnum hoped would help to justify this public spectacle, including the questionnaire administered to each contestant. This account contains evidence about the surprisingly mixed class and ethnic identities of the parents who presented their children at the baby show.

When critics decried his "Grand National Baby Show" as an unseemly public display of private maternal virtue, Barnum countered those protests in part by naming a panel of respectable local women to act as the contest’s judges. The New York Herald newspaper received this letter from a woman incorrectly identified as a baby show judge. Setting the record straight, she sharply criticized the contest and urged mothers not to attend.