Barnum promoted the educational value of the American Museum and stressed his contribution to increased understanding of natural history by exhibiting exotic animals from around the world. But the animals and their natural habitats and habits often paled in comparison to Barnum's heroic tales of acquisition. Barnum used newspaper and magazine stories about the capture of wild animals to draw visitors to the Museum and to his sporadic travelling menageries. These acquisition stories, such as this long description of the capture of Asian elephants, emphasized the dangers, efforts, and expenditures that Barnum undertook to obtain the exotic beasts rather than scientific information about the animals themselves. 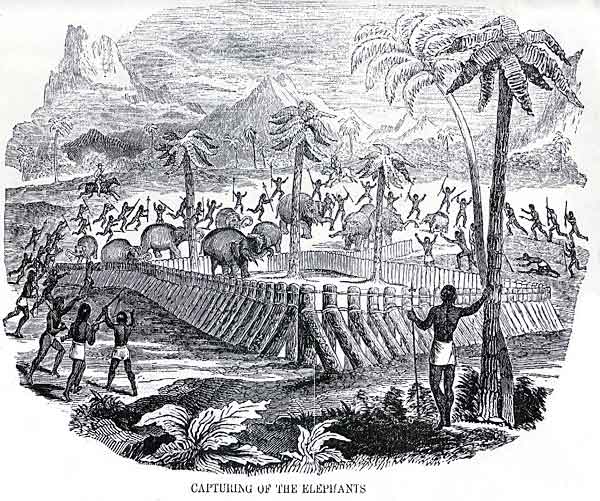 Mr. Stebbings June and Mr. Nutter, of Boston, who undertook the voyage to Ceylon, for the purpose of procuring elephants for Mr. Barnum's Traveling Menagerie, have furnished us with some curious descriptions of their adventures in the interior of the island. On their arrival at Point de Galle, early in October last, they were disappointed in their expectations of procuring tame elephants, either from the government authorities or from the temples which own large numbers of them. They then proceeded to Columbo, the maritime capital of Ceylon, on the western coast, and afterwards to the city of Kany, in the interior, but without succeeding in their object. Very heavy rains had fallen just before their arrival, and the elephants were required to assist in mending the roads. In this dilemma, the elephant seekers determined to go into the jungles, among the wild herds, and endeavor to capture a ship load of the animals. This was considered a dangerous undertaking, as the rainy season had just set in, and the country necessary to be traversed was a dense tropical wilderness, with no other roads than the foot-paths from one native village to another.

Ceylon is divided nearly into two equal parts by a range of mountains running north and south, which divide the periodical rains, so that the rainy season changes from one side of the island to the other, and the elephants follow it. Mr. June captured the greatest number of his elephants in the northern part of the island, near the town of Anarajahpoora.

The first process toward capturing the elephants is accurately represented in the engraving below. The natives, having ascertained the spots most frequented by the herds, construct in the neighborhood a kraal, or pen. This is shaped like three sides of a square, having an aperture on the fourth side for the entrance of the elephants, from each side of which extends a long palisade slanting outwards like the mouth of a funnel. The kraal is made of heavy upright posts, planted at a short distance from each other, and lashed together by withes.* To make them more secure, they are stayed by slanting posts set against them on the outside. When the kraal is finished the natives surround a heard, and by shouts and the firing of muskets alarm the animals, who are urged forward toward the entrance, and at last are all secured within the enclosure. In capturing these animals, the native evince much skill and tact. Our artist had thrown much life and spirit into this scene.

Another way of taking elephants is sometimes practised. The animals, during the heat of the day, will sometimes rest himself against a tree, and take an hour's doze with great satisfaction. Some of the natives are daring enough, at this time, to creep through the jungle till they reach his very feet. Provided with a rope, the other end of which is made fast to a tree, the hind leg of the animal is touched gently, and being very sensitive, he lifts his foot to shake off the supposed fly, and a noose is instantly slipped under. This is repeated with the other foot, and the elephant, waking up, finds himself caught. 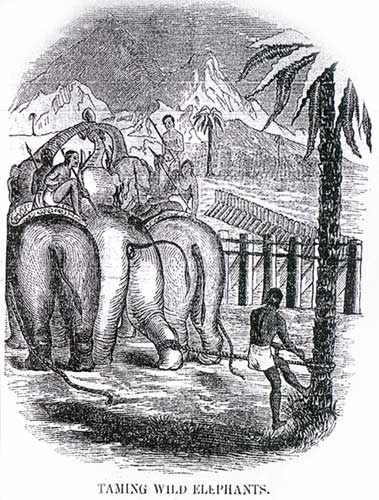 After the wild herd is driven into the kraal, which is instantly surrounded by natives, the nest thing in order is the catching and securing of the animals. This would be difficult and dangerous work, were it not for the assistance of rendered by tame elephants, trained for the purpose. One of these animals will gradually entice one of the imprisoned herd to a little distance from his fellows, and engage his attention by a gentle caress. He rubs his ears, strokes his trunk softly, and mumbles phrases of elephantine endearment, until the susceptible beast is completely beguiled by these tokens of affection. Presently a second tame elephant comes up on the other side, and repeats the process until the most complete confidence is established. Then at the right period they dexterously twine both their trunks around the trunk of the victim, and hold him as in a vice. These elephants wear collars around their shoulders to which stout ropes are fastened. While the trunk of the wild animal is held, two or three natives are busy in fastening these ropes to this hind legs, and he is thus incapable of moving either backwards or forwards, except as his loving friends allow. He is then taken to a neighboring stream and watered. He is approached very cautiously at first, but in the course of ten days or two weeks, becomes docile enough to be driven at large with the tame beasts. 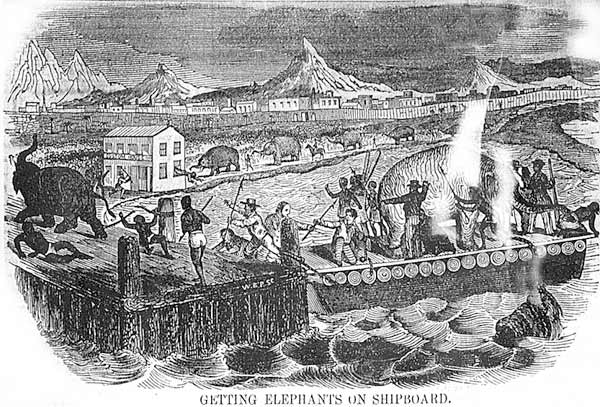 After three months spent in the interior of Ceylon, Messrs. June and Nutter succeeded in capturing eleven elephants, ten of which they brought to Point de Galle for the purpose of shipping in the bark Regatta. The hold of the vessel had previously been prepared for their reception, but as the vessel lay at some distance from the pier, it was necessary to put them upon lighters and row them out to the anchorage. Thousands of persons from all the surrounding country came down to the shore to witness the operation. Among the elephants was one of the class designated in Ceylon as the rogue elephants. They are solitary beasts, who are banished from the herd on account of their mischievous or unsocial propensities. Mr. June's rogue, which is considered the most invaluable animal in his collection, gave him a great deal of trouble before he was shipped. He broke loose several times, and on one occasion, in Kandy, demolished a plantation of bananas before he was captured. When his turn came to be placed upon the lighter, he manifested the utmost repugnance to trusting himself on such an unsteady footing, and making a desperate effort, succeeded in breaking the ropes by which he was bound to one of the posts on the pier. He immediately made for the shore, and the crowd, seeing him charging full towards them, scattered in all directions. One of the customs house officials sprang out of the window and took to his heels. After a great deal of trouble the rogue was secured and taken on board the lighter. When they had left the pier and were fairly afloat on the water, the animals had sufficient sagacity to keep quiet ,and did their best to preserve the equilibrium of the lighter. Our artist had given a faithful sketch of this process, in immediate connextion [sic] with this description, which will give a good idea of the immense labor and effort required in securing these powerful and unwieldy animals.

HOISTING ELEPHANTS ON BOARD 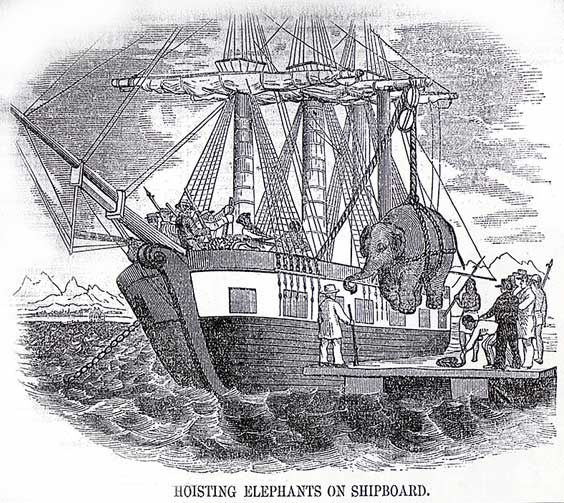 After the difficult work of getting the elephants on board the lighter, two at a time, it yet remained to get them on shipboard and lower them into the hold, which was rather a hazardous work. It was effected by an apparatus similar to that employed for hoisting horses on shipboard—a strong tackle, to which bands were suspended, and passed around the body of the animal. After he was securely slung, he was raised by a windlass. The elephants at first resisted the proceeding, but after losing their foothold, they became perfectly quiet, and were deposited in the hold without much difficulty. They behaved remarkably well during the passage, accommodating themselves to their straitened quarters and hard fare with a patient philosophy worthy of general imitation. One of the younger animals died after leaving the Cape of Good Hope, and was thrown overboard. The others arrived safely, after their voyage of 12,000 miles. They are accompanied by a native Cingalese, who will make with them the tour of the United States. 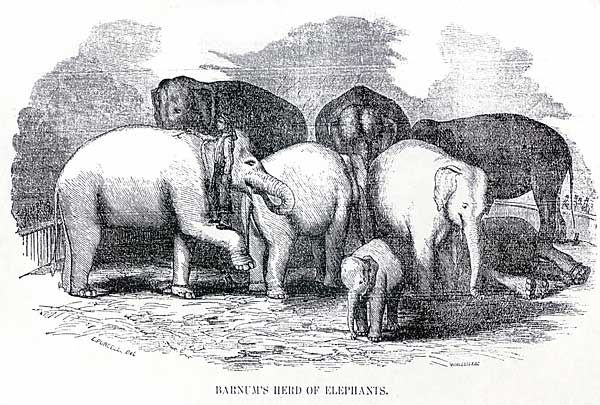 Our artist has sketched for us here a very life-like scene of the herd of elephants attached to Mr. Barnum's Traveling Menagerie, and which form the main feature of its attraction. These elephants, as the reader will have learned from previous numbers of the Companion, were hunted for this establishment in the jungles of Ceylon, by Messrs. June & Nutter. Among them will be observed a calf elephant, which is the especial pet of Tom Thumb—the general being also a part and parcel of this grand show. It is astonishing to think how docile these huge creatures are, when it is remembered that but a brief time since they were running wild in the jungle; it would seem as though they understood even the words addressed to them.

* withe: a strong flexible twig, especially of willow, suitable for binding things together; a band or rope of twisted twigs or stems.